Request Information
Can you help?
Donate

A Positive Place to Live 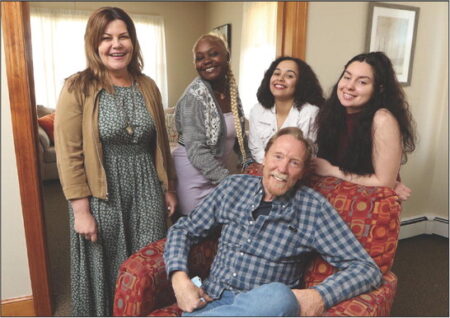 When Courtney Santiago was homeless for two weeks, she didn’t know where she would end up next. As a kid, Santiago entered the foster care system and moved around a lot, meaning she didn’t get too comfortable in one town, in one home and with one family for very long. Four months later, it’s as if Santiago is living a different life entirely. Now, she is studying for her driver’s permit test, saving up for a car and getting her own apartment — all while living comfortably and securely.

And it’s all thanks to Project Kompass, a local nonprofit organization that provides up to 18 months of transitional housing for women aged 18 to 24, new mothers and other people in need. Santiago is one of six women currently living in its Lowell home, and nine live at a location in North Chelmsford. Both locations are dedicated to young people who are experiencing homelessness or are otherwise displaced. The organization celebrated the opening of the homes at a ribbon- cutting event on April 13.

Days before moving into the Project Kompass home, Santiago said she slept at a homeless shelter for several nights. Luckily, her foster mom wrote her a referral to Project Kompass and she was able to move in. For that, Santiago said she is extremely thankful. “ I actually had nowhere else to go,” she said. “ These past few months, I’ve changed my mindset. I’m focusing more on myself, and I’m happier now that I’m here and just feel more free, more alive, and it’s all thanks to them.” 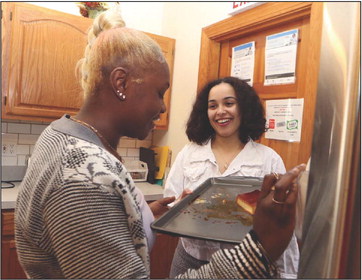 Project Kompass residents Cyrilyn Clemens, left, and Elizabeth Suarez take out leftover flan, a dessert, that Suarez had made.

As part of the organization, residents must complete household chores, attend school at least 32 hours every week. do community service for three to five hours per month and participate in Project Kompass programs, including a financial literacy group and a savings course. In exchange, the organization provides transportation to and from their work, school or appointments and supports residents in whatever ways they need it.

Ronnie Hoey, co-founder and executive director of Project Kompass, said she and other volunteers also help women set goals for their future, which can focus on their education, career aspirations and other long-term desires. This, Hoey said, is an important step for them to understand and determine when they will be able to move out of the home.

Since its founding in July 2020, Hoey said she’s been able to see the transformative impact Project Kompass has on young women. Nearly 30 people have stayed at one of its homes, but Hoey said she would have been satisfied if she only helped one.

“ We work directly with our residents to determine what their mini-goals are to allow them to obtain the big goal of independent living,” Hoey said. “I have a personal deep desire just to pay it forward, and if I can change the life of just one person, then I’m going to feel so grateful.”

There are more than 250 people experiencing homelessness in Lowell as of October 2021, according to Community Teamwork Inc. Chief Program Officer Carl Howell. Comparatively, there are nearly 18,000 homeless Massachusetts residents, almost 500 of whom are “unaccompanied young adults” 18 to 24 years old, according to January 2020 data from the U. S. Interagency Council on Homelessness.

Project Kompass Board Chairman and Co-founder Dave Aldrich said young people with housing insecurity do not receive the necessary support, perhaps because few can identify them. He said that is why he feels it’s important to find those who are struggling and offer them help.

“ With this group that we’ve identified as clearly underserved, they don’t go into shelters, they tend to quietly become homeless, they’ve been traumatized by whatever life may have thrown at them that caused them to be into this situation,” Aldrich said. “We look at ourselves as a bridge between the public sector and the private sector, but we’re able to understand our people far better than typical case managers, (Department of Youth Services) or other organizations.”

CC Clemens, a 19-yearold woman from Lowell, said she was having problems with her family and was unfairly responsible for babysitting a family member’s children. That prompted her to decide to go to school, later leaving her home to pursue that dream.

Clemens has now lived at a Project Kompass home for about a month and is funding her way through Middlesex Community College, where she hopes to study nursing and eventually become a pediatrician.

“I feel like being here, I can completely be myself,” Clemens said. “My goal is to get a job and start working and save up.”

Besides aiding young women, Project Kompass also stepped up when an immigrant family did not have stable housing. When Aude Michele Moutep Betnga, her husband and two young children moved to the U. S. from Cameroon in December 2019, they found housing with a member of a church in Lowell. But after several months, they needed to find other options.

Someone from the community created a Go-FundMe page for Moutep Betnga, which received more than $4,000 in donations to find the family housing. That got the attention of Hoey and the Project Kompass team, who invited Moutep Betnga’s family to stay with them.

They stayed there from July 2020 to May 2021 and now have a place of their own. Moutep Betnga said she is already paying it forward, having hosted four people in her house and financially supporting them, too.

Project Kompass gave her and her family an opportunity, Moutep Betnga, and for that, they are now part of her family. She called the organization her “ life-changing people.”

“ They provided everything. We had a house. For almost one year, we never paid anything, any single thing,” Moutep Betnga said. “ They were so amazing with us, and we’re just grateful. They gave us an opportunity to know that in this world, everything is not just bad.”

Hoey said it’s always been Project Kompass’s mission to be a safety net and support system for all those who pass through their program — no one gets left behind.

“Once someone leaves the PK home,” Hoey said, “ they don’t leave the family.” 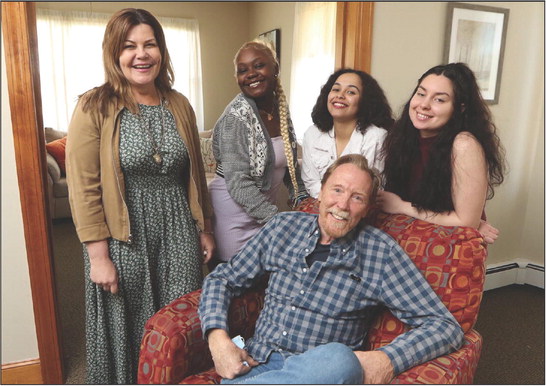 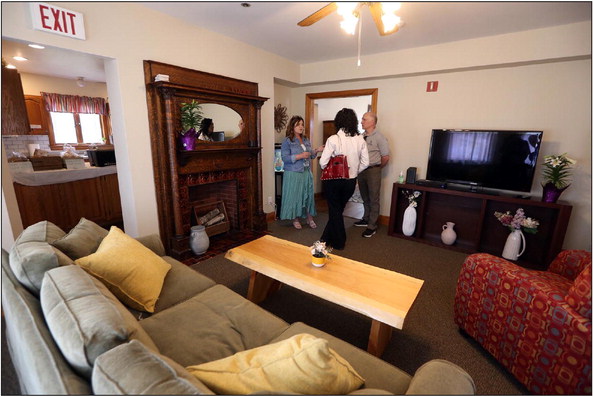 Project Kompass Executive Director Ronnie Hoey, left, and others talk in the doorway of the common area. 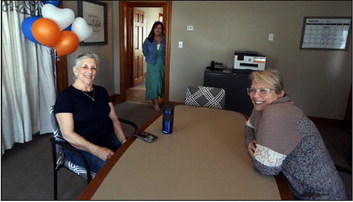 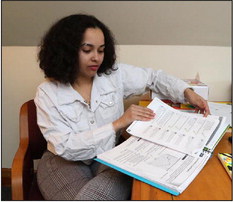 Elizabeth Suarez is seen in the third floor room used for art and other projects. she’s taking a writing class as she works on her Ged. 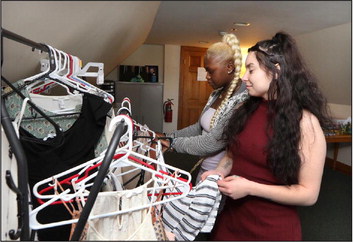 At the Project Kompass transitional housing for women in North Chelmsford, residents Cyrilyn Clemens, left, and Courtney Santiago look at the clothes rack where residents can pick out clothes or leave clothes they’re done with.

Stay in the loop with Project Kompass’ latest news